A few days ago news came out that someone thought they had identified the Zodiac Killer.  I have several friends who know much more about that case than I do, and they agree that this is likely, not true.

Talk of the Zodiac brought back a memory.

In the late 90s, I was working Homicide for the Seattle Police Department.  I was at my desk when one of the Administrative Assistants buzzed me on the intercom.

“I have a lady on the phone who would like to speak with someone about serial killers.  Can you speak with her?”

On the other end of the line was what sounded like an older woman, perhaps in her eighties. She introduced herself as Zenith Morningstar, a name right out of an Elmore Leonard novel.

She asked me several general questions about serial killers, and I answered as best I could.

“What do you know about the Zodiac Killer?” she asked.

I knew several murders from the Bay area to Southern California were said to have been committed by him. He’d allegedly sent cryptic messages to the police investigating, but not much more.

She seemed like a very nice lady and thanked me for the information.

The next day, I received another call from Zenith.

“I think my boyfriend is the Zodiac Killer,” she said.

She listed several reasons, none of which were that impressive to me.  I was polite and told her it was unlikely her boyfriend was the Zodiac Killer.

That started a bevy of calls.  Zenith called me almost every day.  Fortunately, she only kept me on the phone for five minutes or so.  She continually referred to me as Detective Steiger.

During these daily calls, she would try to explain again why she thought her boyfriend was guilty.

He had no ties to that area, and there was no evidence to substantiate her claims.

She sometimes just called to chat.  I was nice to her, recognizing the actual motive in her calls.  She was lonely.  I could spend five minutes or so a day speaking with her. She told me she lived in an apartment above the Pike Place Market and all the comings and goings in her life.

She would occasionally stop by the Homicide office to give me a Christmas card or a book on the Zodiac Killer.

Finally, several months into our calls, she had some news:  Her boyfriend had passed away.

“I’m so sorry, Zenith,” I told her.  At least you don’t have to worry about him being the Zodiac Killer.”

She continued to call for several months. Finally, she had some news:

“My boyfriend.  He’s returned as a dog.”

I spent several minutes telling her how unlikely it was for her boyfriend to return as a dog incarnate.  She insisted it was true.

She continued to call for several more months until the calls just stopped.  I thought she had probably passed away.

I didn’t hear anything for about ten years.

A month before I retired, I came into my office one morning.  The message light was flashing on my phone.  I played the message. The call had come in about three in the morning.

“Hi, Cloyd,” Zenith’s voice said, much more feeble than it had been. “I’ve been thinking about you and just wanted to say hi and thanks for listening to me.”

There was no caller ID, and she left no callback number. 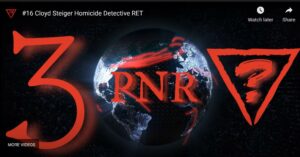 Here’s another podcast I did with Adam Rodriguez.