On June 1, 2014, my phone rang at 2:30 in the morning.
Bob Vallor was calling.
“There are two dead at 29th and South King Street from a shooting,” he told me.
I got out of bed and headed to the scene.
29th and King is in the middle of the Central Area. There had been a lot of gang shootings there recently. I was sure I was on my way to a gang-related homicide.
I was wrong.
Two bodies lay in the middle of 29th Avenue in a residential neighborhood. They’d both been shot multiple times, though one of them had been shot more, with several close-range shots to the face.
My belief that this had been gang-related evaporated that night. I would be surprised that this was the work of a serial killer.
Over the next few weeks, we tied these murders to another in Skyway, in unincorporated King County just south of the Seattle city limits.
We identified the killer as Ali Muhammed Brown, a radicalized American Muslim. We started the hunt.
We released his photo and name to local media a few days later.
I was in my office when I received a call from a detective in the small New Jersey Coast city of Point Pleasant Beach.
He told me there had been an attempted carjacking in his tourist town the day before. He had identified the suspect as Ali Muhammed Brown, who was still at large.
“I Googled the name,” he told me, “and found out he was wanted for murder in Seattle!”
He had a surveillance photo from his crime. I asked him to email it to me. When I got it, I confirmed it was the same person.
“You know,” he said. “There was a weird murder in West Orange a few days ago.”
He told me about the crime: a seemingly innocent 19-year-old man home from his freshman year in college was gunned down on the street in a pretty affluent area.
I contacted the Essex County Homicide Task Force in Newark, and we compared notes. At first, they didn’t think their crime was related, but ballistics showed that the same gun used in the three Seattle cases was used in their case too.
Brown was arrested in New Jersey. I flew there the next day, along with Al Cruise from my office, Jake Pavlovich from the Sheriff’s Office and Prosecutor John Castleton.
We went to the Essex County Jail, where Pavlovich and I interviewed Brown. He admitted to the murders. He picked his victims at random. This was payback for all the Muslim lives ended by the US in Iraq, Syria, and Afghanistan.
He was also charged with the murder in New Jersey.
I flew to Newark to testify in a pre-trial hearing. Before the trial, Brown surprised everyone, including his attorneys, by saying he wanted to plead guilty. He admitted in open court that he’d killed the New Jersey victim and said, “I killed those people in Seattle too!”
He stayed in New Jersey for a couple of years before being sentenced to life without parole for the murder and a state charge of terrorism. Then he was sent to Seattle.
He languished in the King County Jail, refusing to speak to his attorneys before finally entering guilty pleas here as well.
On Friday, September 9, he will be sentenced to three more consecutive life sentences, more than eight years after my phone rang that June early morning.
I planned to attend the sentencing to support the victim’s families, but I will be in Savanah, Georgia, preparing to speak at a crime conference.
Brown left a trail of destruction in the lives of four innocent families for no good reason. May he rot in prison. 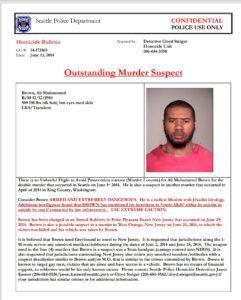