Here’s another podcast I was recently a guest on:  https://youtu.be/pakcBAVxN5w

Murder was the Case Podcast 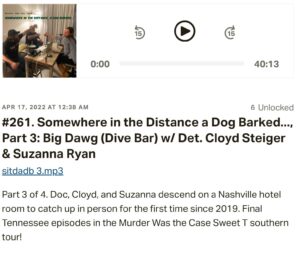 I recorded four episodes of Murder was the Case podcast with Dr. Lee Mellor and Suzanna Ryan in Nashville.  Listen here:  Patreon

Dealing with the news

I attended a meeting of the Retired Seattle Police Officer’s Association today.

The guest speaker was Brandi Kruse, a former Seattle news personality who has recently gone independent with her podcast-a refreshingly common sense take on Seattle’s hard-left political landscape—one that is destroying a once-great city.

I first met Brandi when she was a twenty-something reporter on KIRO Newsradio. She wanted to interview me about an equivocal death investigation I was doing. I agreed to the interview. She later went to the Seattle FOX affiliate. She interviewed me on the air about my first book, Homicide:  The View from Inside the Yellow Tape.

Her appearance got me thinking about my relationship with local—and a few national—news personalities.

I know most of them well, our paths crossing several times over the years.

Most reporters covering crime stories are trying to do a good job. Our objectives didn’t always mesh. They wanted the exclusive tidbit on high-profile murders; I had to protect the case by not releasing sensitive information.

In a phone conversation with a well-known local reporter about a super high-profile murder, she begged me to give her something she could report.

“I can help you get this guy!” she said.

“Everything I say to you,” I told her, “I’m whispering right into the ear of the killer. He’s watching all of the news about this case. If he knows I’m on the right track, he may destroy evidence or do something else to throw me off. If he knows I’m not, he can relax. I want him to wonder, so he’ll screw up and make a mistake.”

In that case, that’s exactly what he did. My partner and I were right there to catch him when he f**ked up.

I also had fun with the local press too.

Whenever I was at a murder scene where multiple news cameras were filming, I sought out a patrol officer who was obviously a rookie, probably on their first murder scene.

I would walk up to him or her.

“Call your mom and tell her you’re going to be on the news tonight.”

I would then walk them away from the crowd and kneel down,.  I’d point at the ground while speaking with them or I’d point off in the distance. The news loves detectives pointing.

I wouldn’t be pointing at anything really, but invariably that shot would make it on the air.

A year or so before I retired, I was at a horrific murder scene where a woman and her baby had been murdered.

As I walked out of the house, a line of camera’s pointed in.

I was passing the cameras when one of the videographers looked at me.

“I’ve been filming you for thirty years.”

The photo in the post wasn’t a fake point.  Photo credit:  Brandi Kruse. 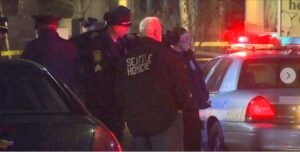 One of the things I was most proud of during my time in SPD Homicide was how we treated visiting agencies when they came to Seattle and needed help.

We had an unwritten policy: Help the visiting agency by working the case with them as though it was your own.

I made many friends, most of which I still have today, by doing just that.

In the early 2000s, detectives from the Wichita, Kansas police department came to Seattle. They were investigating a no-body domestic violence murder of a woman there. The woman’s boyfriend had disappeared before being found unconscious on the shore of Puget Sound in Discovery Park. He’d been taken to Harborview Medical Center and admitted to the Intensive Care Unit.

The Wichita detectives flew to Seattle on a four-passenger prop plane belonging to the local sheriff’s office, flying in hops to Seattle and landing in various places to refuel.

Not familiar with Seattle, they landed at SeaTac airport on a windy and rainy evening between incoming passenger jets instead of heading to Boeing Field. Later, they described the landing to me as harrowing.

I met them in the Homicide office on the 7th floor of police headquarters.

One of the detectives I met was Kelly Otis. He and I became friends and continue to be so today. Kelly was involved in the BTK serial killings in Wichita and later took part in the arrest of Dennis Rader for those killings.

After we discussed what they needed, I took them to the site in Discovery Park, where their suspect had been found. It was a beautiful sunny day. They were amazed at the beauty.

Later I drove them to Harborview.

We went to the ICU there.  A young female resident was in the unit when I approached.

“These detectives,” I told her, “are from a star named Kansas.  They’ve come to the Emerald City in search of answers.”

She stared at me for a moment before laughing.  She answered all their questions.

Shortly after that, they received word that the suspect’s car was located in Colorado. The victim’s body was in the trunk.

The plane they flew in on had been moved to Boeing Field.  I drove them there so they could begin their hops to Denver.

In recent years, advances in DNA and other forensic technologies have helped solve crimes, especially in cold case murders.
I often tell people that forensics has advanced more in the past two or three years than in the previous twenty years.
That being said, it’s still up to the detective investigating a case to be diligent in their investigation. Just because DNA or a fingerprint is found at the crime scene, even on the victim, it doesn’t mean the contributor is the person who committed the crime. It’s up to the detective to figure out how the evidence could have been at the scene other than by the suspect. There will never be a technology that replaces good police work. Sometimes inexperienced detectives think the crime lab can do all the work for them. That is a fatal mistake.
In sex crimes, this is especially important.
Allegations of inter-family sexual abuse where a few spermatozoa were found on a child’s underwear are a particular problem.
An act as simple as doing laundry can transfer DNA when no crime was committed. Evidence can survive going through the wash. There must be corroborating evidence (such as disclosures by the victim) before one can be sure how the evidence got there.
When I trained young detectives, I told them to think of any way the evidence could have been deposited other than by the commission of the crime. Then go and find out why that couldn’t have happened.
When I was a young Sex Crimes detective, I investigated a case where an older woman was raped in her home. A fingerprint was developed on a phone book just inside her door in processing the scene. It was matched to a suspect. I brought the suspect in.
“Remember the time you stopped by this house to borrow the phone book?” I asked.
“I never borrowed a phone book!” the suspect said.
“Well then, you used to deliver phone books to that neighborhood!” I accused.
“I’ve never delivered phone books!” the suspect told me.
Thank you very much. I just eliminated the only two ways his fingerprint could have gotten on the phonebook, other than having committed the crime. I didn’t even need a confession.
He pled guilty before trial.
Don’t rely on forensics to solve the case. They’re a great tool, but they don’t replace good detective work.