On my way to work on July 3, 2013, I was notified of a body found on railroad tracks south of South Spokane Street at 5th Avenue South.

I was next-up for a murder, so I responded directly to the scene.

When I arrived, a freight train was stopped northbound on the tracks. Just in front of the train on a parallel track was the mostly-nude body of a white female, her arms and legs splayed to the side.

I spoke to the patrol sergeant at the scene.

“That train,” he said, pointing to the locomotive, “was coming slowly up the track when the engineer saw the body on the next track over. He stopped and called the police.

“We contacted two transients in the tents over there,” he said, gesturing to two tents beside the track. “The people inside denied knowing anything about the woman, but a male in one of the tents had blood on his shoes. He told us he’d been in a fight earlier, and it was his blood. I’m having them transported to your office.”

I walked to the body. A light blue top was bunched up near her head, and a purse strap was against her neck. She was nude from the stomach down. Her face was bloodied.

On her left wrist was a parallel blood drop. That’s unusual in a case like this. I hoped the killer had been bleeding and had dripped blood on her.

There were what appeared to be drag marks from the area of the tents to the body’s location.

I looked around the tents next to the tracks. The bloody shoes one of the males had worn were outside one of the tents.

CSI detectives arrived to process the scene. Later the medical examiner arrived. Doctor Aldo Fusaro examined the body, and it was removed.

I returned to the office to interview the people Patrol had detained.

Roger Seela was a Native male. I entered the interview room. He was very intoxicated. I obtained a search warrant and had him taken to Harborview Medical Center for a blood draw to determine his blood alcohol content in case he was the killer.

When he returned, I had him placed back in an interview room. I let him sleep for a while until I thought he was sober enough for the interview.

He denied knowing anything about the murder.

“I was in a fight earlier,” he said. “I got a bloody nose. That’s how the blood got on my shoes. I was super drunk when I went back to my tent. I didn’t hear anything.”

I also interviewed a Native female who identified herself as Seela’s girlfriend. Her story was consistent with his.

Later I submitted a lab request, asking that the blood on Seela’s shoes be typed for DNA and compared to my victim’s blood.

Dr. Fusaro conducted an autopsy on my victim, later identified as April Frederick. He determined she died of manual strangulation (strangulation by hands) and blows to the head.

A few days later, I got a call. The caller said that a transient male named Joseph Cecceralli told people he knew who killed my victim.

I ran Cecceralli’s name in the computer systems. He had an outstanding warrant for his arrest.

I put a bullet out asking for Cecceralli to be picked up for the warrant.

A day later, I heard from a patrol officer. They had Cecceralli in custody.

They arrived several minutes later and placed Cecceralli in an interview room.

I went in. I expected to meet with resistance, but that wasn’t the case.

“I hear you’re telling people you know who killed April Frederick,” I said.

“I think I do,” he replied, completely cooperative. “Someone tried to sell me a watch. It had blood on it.”

After speaking with him for a while, I realized he wasn’t a bad guy.

“You’re going to be my informant,” I told him. “I want you to try to get that watch and report anything you hear to me.”

I got him a cell phone and recorded the number. He called me from time to time, reporting anything he heard.

I made arrangements to meet him one day near where he stayed. I went there at the appointed time, but he wasn’t there.

I drove around the area for a few minutes until I spotted him several blocks away speaking with other transients. I called to have a patrol car meet me nearby.

“There’s a transient at 4th and Holgate,” I told the officers. “He’s an informant of mine, and he was supposed to meet me. I want you to go over there, get rid of the others, and tell him to go to the spot we were supposed to meet.”

I watched as the officers approached the group. They shooed the others away and then spoke to Ceccarelli. He looked startled and then walked away.

The officers returned to my location.

“We talked to him and said, ‘Aren’t you supposed to meet Detective Steiger?’ He said he had forgotten and was heading there now.

I drove to the spot. Ceccarelli was there waiting.

“I’m sorry,” he said. He had obviously been drinking.

He updated me about what he knew.

“You really want to catch the person who did this,” he said, “even though they’re homeless.”

“They pay me to solve cases,” I said. “It doesn’t matter to me who the victims are.

He told me about his life.

He had been painting houses in Hawaii, but he had a severe drinking problem. His father was a state representative, and his brother was a lawyer.

“You should really get yourself into rehab,” I said. “You can’t stay on the street.”

He told me he had a warrant out of Snohomish County.

“I have sixty days hanging up there.”

“You need to turn yourself in soon. At least you’ll have somewhere warm to sleep in the winter, with three meals a day,” I told him.

He agreed and got out of my car.

The lab report came back.

The blood on Seela’s shoes was my victim’s. I arrested him for murder. He had cancer and died in jail before trial.

A couple of months later, I was working nights. I spoke to a friend of mine at the Medical Examiner’s Office, Alison Myrabo, on the phone.

“I have a dead body call down on 3rd Avenue South near Holgate,” she told me.

“I had a homeless informant that stays down there,” I said.

After a while, I decided to drive down there to see what happened. Alison was pulling away as I approached.

“What was your informant’s name?” she asked.

She looked at me, a concerned look on her face.

“That’s the dead person,” she said.

I found out that Caceralli died of pneumonia. He hadn’t taken my advice about spending the winter in jail. 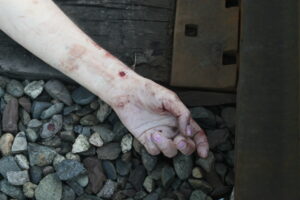 Published by csteiger on January 20, 2022
On a Tuesday, April of 2006, my squad worked nightshift in Homicide. The main phone line into the office rang just before 8:30 that evening.
“Homicide,” I said, answering the phone.
“Hi Homicide, Radio here,” the operator replied. “We have an officer-involved shooting at Broadway and East John. They’re requesting that you respond.”
“We’re on the way,” I said.
We gathered our things in the Homicide office on the seventh floor of police headquarters downtown and headed to the car deck to respond.
My partner Jason Kasner and I pulled up to the chaotic scene. Several police cars parked in the street, their red and blue lights flashing, yellow crime scene tape blocked East John Street east of Broadway. The body of a young white male lay on the sidewalk, his shirt removed, EKG stickers placed on his bare chest by medics before they pronounced him dead.
I approached a patrol sergeant.
“We received a call from that phonebooth,” he said, pointing to a nearby payphone. “The caller said a male told him he would shoot the first police officer he saw.
“Officers arrived and saw the suspect standing on the sidewalk. They approached him, and he pulled a revolver and pointed it at them. They fired and hit him. His gun is over there,” he said, pointing to a revolver on the sidewalk behind the deceased suspect.
I walked over to the weapon. I shined my flashlight on it and noticed an anomaly. There was something in the cylinder gap between the cylinder and the grip. I knelt to get a closer look.
From my position on my knees, I realized what it was. A bullet, presumably fired by one of the officers, had gone in the opening in the cylinder and struck a round that had been loaded there, sending it back to the rear of the gun. It was very significant, unequivocal evidence that the suspect’s gun had been pointed at the officers when they fired. It was physically impossible for the bullet to enter the cylinder if that wasn’t the case.
The show Mythbusters did a segment on this shooting several months later. They had the situation all screwed up. They had the officers armed with the revolver and the suspect with the semiautomatic pistol, opposite reality. They had the round entering an empty chamber, not one loaded with a live round, which had been the case. They concluded that this could have happened.
I know it could have. I was there.

Published by csteiger on January 5, 2022

On June 20, 2005, just before noon, a man walked into the federal courthouse at 700 Stewart Street. He wore a backpack backward on his chest and carried what appeared to be a hand grenade. He ignored security officers standing near magnetometers just inside the front door and walked to a wall in the lobby. He ignored further instructions from personnel in the lobby.

I was in the homicide office with my partner Jason Kasner when we heard about the incident. This had officer-involved shooting written all over it. We were next up for a case, so we responded to the location.

We arrived at the chaotic scene and stayed on the perimeter.

A call was made for SWAT. A visiting head of state was leaving, so most of the on-duty SWAT officers were escorting him to the airport. Tim Pasternak was the only SWAT officer available. He responded from the SWAT office on Airport Way South. Bill Collins was a patrol officer who had recently transferred from SWAT. When Pasternak arrived, Collins joined him in the lobby.

Pasternak was armed with an M-16 rifle. Collins had a shotgun loaded with slugs. Several other patrol officers joined them in the lobby of the building.

The lobby of the federal courthouse was ensconced with bomb-proof glass. That’s very helpful when the threat comes from outside the building. When it is inside, the threat is exponentially worse. The glass will capture the concussion within the building rather than releasing it through broken glass.

People peered over rails from the exposed landings above. If the suspect had a bomb in his backpack, as officers suspected, it was likely they would all be killed in an explosion.

“I don’t like this,” Pasternak told Collins. “I’m going to give him one more chance, and then I’m going to shoot.”

“Drop the grenade!” Pasternak yelled, “and lie down!”

The suspect ignored the commands.

Jason and I were outside when we heard the “shots fired” report over the radio. We prepared to go in but had to wait. The Bomb Squad needed to make the scene safe.

Detective Scott Karahawa, dressed in his full bomb suit, entered the lobby. He approached the deceased suspect. He examined the hand grenade the suspect had been holding. It was a blank, with no explosive charge in it. He then carefully opened the backpack. Inside he found a wooden cutting board.

Once he secured the scene, we entered and conducted our investigation. This was clearly a suicide-by-cop.