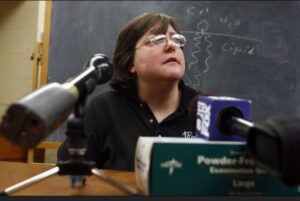 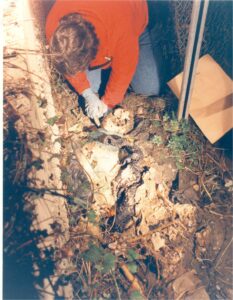 I was at the scene of a homicide in early 1998.  The body’s feet and hands were bound, a gag through the mouth.  The body was completely skeletonized.

When we have skeletonized remains at a scene, we always ask for Kathy Taylor.  KT, as we call her.  At that time, she was a Ph.D. Candidate in Forensic Anthropology but would later attain her doctorate. After officially becoming the Forensic Anthropologist for King County, she contracted with the rest of the state and worked bones cases everywhere.

At this scene–we didn’t know then it was a victim of a serial murderer–KT was on her knees in front of the body.  There was a cavity under the torso, and she put her hands under there to feel around.  She pulled them out and a moment later reach under again.   She did this several times.  Finally, the last time she pulled out her hand, a huge Norwegian rat ran out of the cavity.  I was standing next to her along with other detectives.  It ran across my feet as well as those of several others.  KT screamed and jumped back.

I laughed so hard I thought I would pee my pants.

“If that thing had bitten you,” I said to her, “you’d be getting shots for the next several weeks.”

Sergeant Don Cameron took her hand and made a point of counting all the fingers to make sure they were still there.

I worked with KT many times over the years.  When she had a case with an outside agency she thought was screwing it up, she’d call me.

“Cloyd!  Can you call and speak to these people?”

Kathy was an expert in buried remains and not only processed them but also taught detectives all over how to identify them,  secure them, and mostly what not to do at them.

She worked on many searches for bodies with me and many others.  She was still trying to identify the remains of victims from Ted Bundy and Green River cases.

She was passionate about unidentified remains and worked hard to get them identified.

She was never married but became a foster parent, mostly of children from neglectful or abusive families.  She was telling me about all the kids she’d fostered over the years.

“It takes a special kind of person to take in kids that you know will eventually leave,” I told her.

She was taken aback.

One little boy touched her heart.  So much so, she ended up adopting him. He was her pride and joy. She would tell stories about him, her face beaming with pride.  When she got called to scenes, she’d say, “I have to drop him at my mom’s house before I can come.”

A couple of years ago, Kathy was found unconscious at her home.  She was hypoxic; doctors didn’t know how long she had been deprived of oxygen.  She was in a coma. We all feared the worst.

Miraculously, she came out of that, her mind entirely intact.  While treating her, they discovered cancer unrelated to her collapse.  She took the challenge head-on.  Mostly she missed work and wanted to get back.

I spoke to her about that when she was home.

“Kathy, you’re irreplaceable.  Not only that but [Dr. Richard Harruff, the Chief Medical Examiner in King County and a huge fan] would never do that.”

Eventually, she was able to work from home and then split time between home and the office.  She was thrilled.

A couple of days ago, I only found out after sending her an email and getting no response, which is very unusual, that she was back in the hospital. I heard today that she died overnight.