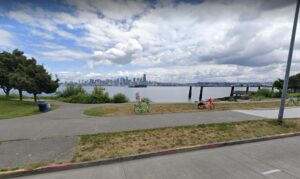 In the summer of 2001, Mike Ciesynski and I were partners.  We were called to the scene of a body found on the side of the road in a wooded area, up the hill from Salty’s on Alki, a restaurant on the waterfront. That area of Seattle is across Elliot Bay from downtown and offers million-dollar views of the Seattle skyline. It’s definitely not the slums.

The victim, a Hispanic male in his twenties, was shot once in the head.

An anonymous call came into 911 reporting the body.  It came from a payphone at a Safeway store at the top of the hill.

A couple of days after we were at the scene, I got an anonymous call.  He saw one of the victim’s friends at three in the morning the night of the shooting at one of those self-service car washes, where you put quarters in the machine, and a pressure sprayer operates until the time runs out.  I told Mike about the call.

“That proves nothing,” Mike said. “Just because he washed his car at three in the morning.”

“He was spraying the inside of the car.”

The guy we were looking for worked for a fish processing company at Fisherman’s Terminal, where the Alaska commercial fishing boats are based, including many featured on The Deadliest Catch.  Mike and I drove there and talked to the supervisor.

He called Jose to the office.  When Jose came in, we introduced ourselves, showing him our badges.  He had that deer in the headlight stare.

This should be tough, I thought to myself.

“Jose, what do you know about Fernando’s death?”

He led us to his car. I opened the driver’s door.  I didn’t see anything. I walked around to the passenger side and opened the back door.  There was a hunk of human brain between the door and the back seat.

I looked at the hunk of the brain and then at Jose’s ashen face. “Luuuuccccyy,” I said. “You’ve got some ‘splainin’ to do!”