In November of 2001, my partner Mike Ciesynski and I were notified of a murder in the Josephinum Hotel in Downtown Seattle.  The Josephinum is kind of like the bar in Star Wars.  Full of oddballs and miscreants of various descriptions. I refer to it as Seizure’s Palace.

Diane Pollard had been found dead in the stairwell of the building.  Paul Suguro from our office responded to the scene, but no one saw an injury.

To find someone dead there is not that suspicious. With no obvious injury, they assumed she’d overdosed.  They took her to the Medical Examiner’s office for autopsy.

On the table the next morning, the pathologist found something everyone else missed.  A .22 caliber bullet hole under her arm pit.

To have a murder with a scene that wasn’t processed is very bad.  It hurts its chances of being solved exponentially.

We learned that Pollard often hung out with a group of guys who lived at the Josephinum.

She normally walked with a cane, but there wasn’t a cane at the scene.

Ciesynski and I went to the Josephenum to visit her friends.

When we knocked on the door, the man who answered had dark hair, a dark goatee and dark horn-rimmed glasses.  We identified ourselves and he let us in.

The layer of cigarette smoke hovered four feet off the ground when we entered.  Three guys sat around a table.  Though it was just after ten in the morning, a bottle of whiskey sat on the table, with beers all around.

As I talked with the group, Mike looked around. He carried a notepad.  He kept dropping the damned thing.  When he knelt to pick it up, he looked under beds and other furniture, hoping to spot Pollard’s cane.

One guy seemed particularly nervous.  He drank beer and slugged shots of whiskey as fast as he could while I was there.

I spoke to the oddball with the goatee who’d answered the door.

“You know,” I said.  “We checked Diane for DNA.  How would you explain it if we found your DNA inside her?”

“Do you mean in her vagina?” he asked.

“Well, I can tell you,” he said.   “I have ejaculated exactly three times in my life.  The first time was a wet dream and the other two, I masturbated.”

When we got back to the office, Mike and I discussed the other guy.  The one slamming the beer and whiskey at ten in the morning.

“We need have a heart to heart with that guy.”

To prepare for the interview, I made up a phony lab report.  The report listed its author as Russell Weklych, BS MKER.  (Bullshit Maker).

Russ Weklych was a detective in our office.

We brought Billy in and placed him in an interview room.

We interviewed him.  There was plenty of room in his skull, so the likelihood of two brain cells bumping into each other was remote.

I showed him the lab report.  He didn’t understand.

At first I didn’t understand what the hell he was talking about. Then it came to me:  He didn’t have any idea what DNA was.

“Just read this line,”, I said, pointing out the ‘conclusion,”.

When he read it, his head bent down, and he cried.  We’ve got him, I thought.

“I’ve always heard of this, but I didn’t think it really happened,” he said.

“What are you talking about?” I asked.

“I heard of people going to prison for murders they didn’t commit, but now it’s happening to me!” he sobbed.

We helped him to the door. 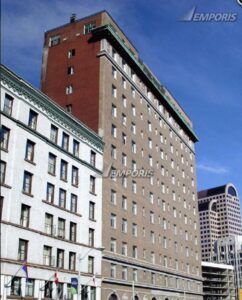 In March of 2006 I arrived in my office to work the night shift. When I walked into the office, Ed Striedinger approached me.

“A guy got arrested at a Rite Aid on Broadway for shoplift,” he said.  “When he was arrested, he gave the name Donald Witt.  They ran his fingerprints in AFIS and found out that he was really Joseph Roubideaux.  He’s wanted out of Rapid City, South Dakota for Capital Murder.”

Capital Murder is a charge that potentially carries the death penalty.

“Cool,” I said.  This was an issue for the detectives in Rapid City, not us.

If I had a murder, especially one that carries the possibility of the death penalty, I wouldn’t want some other agency to interview my suspect; I’d be on the next plane out to do it myself.  We do it all the time.

We called Rapid City PD.  I spoke to Kyle Akers, a detective with the PD there.

“Are you sure you guys don’t want to come out here to interview this guy?” I asked.

That’s the real problem with administrators.  They’re so worried about spending a dime, but they don’t know a thing about investigations.   Most of the time, they just fuck things up.

It’s never a good thing to have someone who knows nothing about a case interview witnesses, let alone the suspect.  He could make some comment that means nothing to the person doing the interview, but if the person who knows the case in and out hears the same fact, he or she would recognize it as important.

As it was, we were on the hook to do the interview.  I didn’t blame Akers; he wasn’t the one making the decision.

We’d give it our best shot.

I had no stake in this case.  I wasn’t involved in any way.  But when outside agencies ask me to do something for them, I pull out all the stops.  I take on the case as my own.  It’s the way Seattle Police do business, and it’s definitely the way I roll.  I would hope if the roles were reversed, I would get the same dedication in return.

My partner Jason Kasner and I talked with Kyle Akers over a speakerphone for about ten minutes, trying to get as much information about the case as we could.  When we finally got all that I thought we were going to get, we ended the call.

“I’ll call you when the interview is done,” I told Akers.  “Hopefully, we’ll have some good news.”

When Roubideaux was brought over from the jail, we placed him in an interview room. The interview was audio and video recorded.

When we entered the room, I took my place on the same side of the table as Roubideax.  Jason sat across from us.

“We just want to talk to you and find out what’s going on,” I said.

We talked for a few minutes, just breaking the ice, playing it lowball.

“Where are you from?” I asked.

We talked for awhile about Montana, and the tribe Roubideaux belonged tol

“Have you ever been to South Dakota?” we asked.

Roubideaux yawned, a sign of deception, and said, “No.”

We carried on the conversation for several minutes, before I said, “I thought we saw that you got a traffic ticket in South Dakota.”—I was totally making that up.

We chatted for several minutes more before I dropped the bomb.

“We found your fingerprints at a house in Rapid City of a guy named Lloyd Redbull.

“I think you know there’s a problem,” I continued.  “You see, Lloyd was found stabbed to death. You see, we’re not shoplift detectives.  We’re homicide detectives.

“We found your fingerprints at his house.”  I was totally making that up.

“Maybe you were there,” I said, “and you left and someone else came and killed him.  I think you heard about it and panicked and left.”

“I don’t know anything about it,” he said.

“That’s not going to work, Joe,” I said.  “There’s a warrant out for your arrest out of Rapid City.  It’s for murder.  If there’s some innocent way your fingerprints showed up at Lloyd’s house, you have to tell us now.”

Joe felt the noose wrapping around him.  His left leg bounced up and down continually; he rubbed his head so much I thought his hair would soon fall out.

I upped the ante a little more.

“The problem is,” I said, “is your fingerprint was found in blood.”

Again, I was totally bullshitting.

I produced a copy of his arrest warrant.  Written on it were the words, Death Penalty Offense.

“What we have to do, Joe,” I said, “is find ways to get this down to something less than the death penalty.

“Just tell me mitigating circumstances,” I said.  “Those are things that make it better for you.  I’m not even asking for anything that makes it bad for you.”

“I guess this wasn’t the perfect crime,” he said.

“No Joe,” I said.  “This couldn’t have been worse for you if you’d planted evidence yourself trying to be convicted.

The interview lasted more than three hours.  Though Roubideaux didn’t explicitly confess, he wrapped himself in so may knots, it was as good as a confession.

We booked him for the murder.

Almost a year later, I traveled to Rapid City to testify in his trial.  The prosecution was thrilled with the interview.  It was played in the trial.

Roubideaux was convicted of the murder, though he received a life sentence rather than the death penalty.

While I was there, I went to Mount Rushmore on a Tuesday evening.

I’d been there before several summers earlier, but this time I was the only one there who wasn’t at work.  It was fabulous.