The Truth Shall Set You Free

Published by csteiger on September 4, 2019 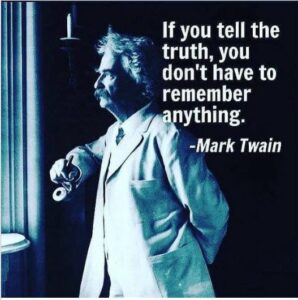 When I was involved in lengthy interrogations guilty people accused of murder, they inevitably got tripped up. They made up the answers to the questions I asked, thinking they’d be able to convince me they didn’t do it.
The problem is in a long interview, they forgot what they said earlier, and contradict themselves later. I could sit back and wait until it was long enough since the suspect made a statement, and then slip a question in about the same fact. They’d always give a slightly, but significantly different answer because they couldn’t remember what they said earlier.
When I pointed that out to a suspect, he’d (it’s almost always a he) say, “I didn’t say that!”
I’d say, “Yes, you did.” because I remembered. He would insist he didn’t.
“This is being video recorded,” I’d say to them. “We can play it back.
If you’re telling the truth about an event, you can tell it over and over again. There may be minor omissions, but you can pretty much recount the event. When you lie and say things off the cuff, you cannot.
I talk about this to detectives to whom I’m teaching Interview and Interrogation.